Trico V.E. parent company, Mariner Holdings plc, has invested to ensure Trico’s enamelling plant is one of the most modern in Europe. 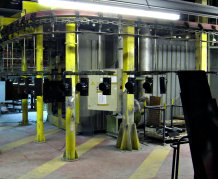 Vitreous Enamel
Due to its ts unique appearance and its resistance to corrosion and extreme heat and light; vitreous enamel’s popularity is growing.
Its use is widespread and is seen on signage / wayfinding map panels, domestic range cookers, architectural cladding and flue pipes. It is also used on a number of bespoke applications.
Trico is considered to be one of the key European suppliers of Vitreous Enamel products and has been supplying worldwide since the 1890s. See Trico VE History